Sometimes the Call to a pilgrimage has nothing to do with a travel bucket list but is instead an opportunity too good to pass up. The unexpected destination with no personal agenda can turn into an experience of great delight. It is just such a Call that sent me to Taiwan in January. Eighteen months ago my dearest friend since 4th grade, Melynie and her family moved to Taiwan to teach English and business at a small private academy in central Taiwan. Melynie has an adventuresome spirit and an intense wanderlust. Her husband spent his teenage years in Uganda. The ex-pat life was calling and they had the perfect temperaments and life situation to accept the challenge.

Since I was going to be in California in February why not just swing by Taiwan first—much closer and cheaper ($500) than from Tennessee and Melynie had time off for Chinese New Year. I loved Thailand and Cambodia so much last year that I will take any excuse to go back to Asia.

So after 4 movies, 3 marginal meals and a sleeping pill, I landed in Taipei. Melynie met me at the airport and we took the metro to the central station where I had booked an adjacent hotel (Caesar Park Taipei). I was tired but there was lots of catching up chatter before the lost night caught up with me. When we are together we are school girls again remembering happy times and beloved family and friends.

Taiwan doesn’t have a Great Wall or Taj Mahal, which keeps it off of most tourism lists. This is unfortunate for Taiwan but a delight for me. There was no lack of subtle and not so subtle delights without the crush of tourists which meant I had a very authentic experience instead of pre-package agenda for tourists. Taiwan has worked hard to include signage in English for all transportation and popular sites which made getting around on our own very manageable with my non-existent Mandarin. Taiwan is prosperous, very tidy, organized and friendly. There are lines taped on the floor in front of the metro doors so travelers will lineup in an orderly manor to let passengers leave the train first before loading into the immaculate and quiet trains. In short, Taiwan is easy to love but at the same time exotic and foreign. 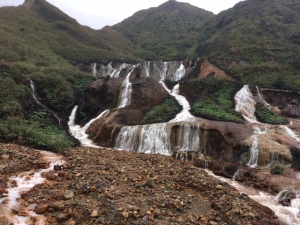 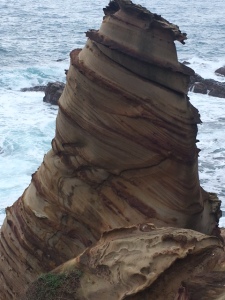 The first day we took a train north to Jiufen and the coast and enjoyed a golden waterfall colored by the local gold mine and sandstone formations worn beautiful by the sea. Of course shopping and lunch are high on the agenda and the traditional market was delightful. The tiny shops have awnings over the narrow street keeping most of the frequent rains off the shoppers. Trinket shops and food stalls alternate along the way. I spent time writing with a traditional hair brush, choosing a stamp for my name and finding painted cats for gifts. Vegetarian Melynie and former-vegetarian me, made sure we chose our food carefully: fresh dumplings, fried rice and tofu were perfectly identifiable. Some mochi covered strawberries and ice cream wrapped in peanuts and crepes made a perfect dessert.

The next stop was Shinfen to launch traditional paper lanterns. This little town has built an industry around these rice paper and bamboo hot air balloons. We choose the color of our balloon to correspond with our wish for the New Year and then wrote these wishes on each of the four sides. The vendor wrapped the metal ties at the bottom with fuel soaked paper. He lit the paper as we held the sides. Quickly the balloon left our grasp and gently floated to the gods along with dozens of other balloons. A beautiful sight.

Back in Taipei we visited the largest night market, Shinlin, for more shopping and supper. Amongst the whole roasted pig, octopus tentcles on a stick, mystery meat sausages and “eight clawed octopus burned”, we found waffles with crème filling and delicious grilled cheese sandwiches which suited our less adventurous tastes just fine.

The second day we spent time seeing Taipei. First we went to the Chiang Kai-shek Memorial to see the changing of the guards. This big complex has two large auditoriums and a memorial surrounded by traditional gardens. Chaing Kai-shek is the founder of modern democratic Taiwan and is honored with a large statue reminiscent of the Lincoln Memorial in Washington, DC. Every hour on the hour is an elaborately choreographed changing of the guard. Then the two new guards stand perfectly still for an hour until the next ceremony. Very impressive. We visited an art exhibit and signed our names to the guest book which looked so out of place amongst the graceful characters of the Chinese signatures.

The next stop was to the 8th tallest building in the world, Taipei 101. The architecture is meant to look like growing bamboo and has an elaborate fireworks display every New Year’s Eve. The first five floors have an extensive food court and upscale mall. But the main attraction for me was the world’s fasted elevator—84 floors in 37 seconds—3000 ft per minute. The return ride takes 45 seconds. That was fun! The observation deck theoretically has stunning views but that day I got to see the inside of a cloud instead. The inner workings of the tower are also on display—a large damper to offset the sway of the building. By then it was lunch time and of course I was ready for more amazing fresh dumplings. We visited a couple of temples but the best temples were yet to come. It was time to head to Melynie’s home two hours south of Taipei so we boarded the high speed train (280 km per hour) and then a local bus and arrived in time for dinner with her family.