Hamilton and I each had things we wanted to do and see in Thailand but we both had a deep desire to go to Cambodia and visit Angkor Wat. When we would talk about visiting Southeast Asia it was always traveling to both Thailand and Cambodia. When he was a boy living in Thailand it was not safe to visit Cambodia. Just say “largest temple complex in the world” to me and Angkor Wat goes straight to the top of my must-visit list.

Angkor Wat is in the northern part of Cambodia next to the city of Siem Reap, just a couple of hours south of the Thai border. The largest religious monument in the world, it covers over 400 acres with with dozens of individual temples. The most important and best preserved is the temple of Angkor Wat. The temples were built starting in the early 1100’s and were active until the 1700’s. During that time it changed between Hindu and Buddhist many times depending on what king was in power but is now Buddhist.

After our bus tour we had made arrangements to go to Cambodia. It seemed like a good idea at the time just to drive down to Siem Reap as we were relatively close to the border. Well, it was a bit more complicated and challenging than we expected and included dragging our suitcases through the long and congested border gray zone and surrendering our passports to a man on a motorcycle along with bribes for visas. There were moments I was pretty sure that I was going to be featured on next season’s Lock Up Abroad.  Eventually we made it to our beautiful hotel and finished the day with a sunset boat ride on a large lake with floating villages. We flew back to Thailand a few days later—a wise decision. I love a good adventure but that border crossing was almost a bit too much adventure.

The next morning started bright and early because I wanted my first glimpse of Angkor Wat to be at sunrise. Our guide picked us up in the dark and we went and purchased our tickets and walked through the night across ancient paths and bridges to a pond with a dark silhouette of the temple on the other side. The stars were bright and Venus was hanging low with the moon. We stood with quite a large crowd waiting to see this remarkable holy site be illuminated by the morning sun. Eventually the sun peaked over the tall towers and reflected on the pond in front of us. As the temple reflection mingled with the water lilies, it almost too much to bear, with the pink, blues, purples of the flowers and morning sun illuminating this glorious shrine to the gods. 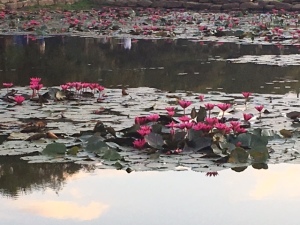 We walked across the bridge, through doorways, up and down steps until we reached the center of that holy place. It was still early so there was a cool breeze and the larger crowds hadn’t yet arrived. It is as awe inspiring as the great cathedrals of Europe, the monumental temples of Luxor, the crystal city of Machu Picchu and the magnificent Grand Canyon. It is a humbling expression of man’s insignificance before the Divine. 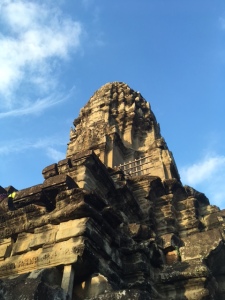 On the bottom level are four pools with four more pools on the level above. Every bit of the walls inside and out were covered with fine, detailed carvings depicting the epic stories of the Hindu gods as well as celestial dancers celebrating life. We climbed the narrow and very steep steps to the upper level to see the second set of pools and look out at the deep green countryside. Along the walls were headless Buddhas in mediation. Some had gold sashes reminding visitors that this is still a very holy place. As with all of the great temples built by our ancestors, it is breathtaking in the current expression. I can’t imagine how amazing it was with ponds full of lilies, the walls painted and the Buddhas whole. 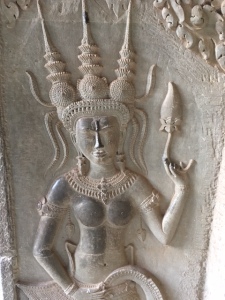 The shrine to Buddha is back on the main level. Although Angkor Wat was mostly lost in time, for 300 years the main temple was always tended by monks so the energy never left this special place. Two monks were sitting by the shrine giving blessings to those who were ready to receive. I lit incense before the golden Buddha and then knelt in front of the monk for my blessing. First he put a pink cord on my left wrist and the took a whisk dipped in holy water and shook the water on my head as he chanted prayers.

It was hard for me to leave, I had dreamed of that morning for a long time and I didn’t want my visit to be over but it was getting warmer and we hadn’t had breakfast. So I said my good-byes knowing that I would be back. Like so many of the most holy places on earth, it is so overwhelming that I can’t take it in on the first visit. As I write this I’m listening to the music that I chose for my pilgrimage and my powerful memories entwine with the notes. I will go back.