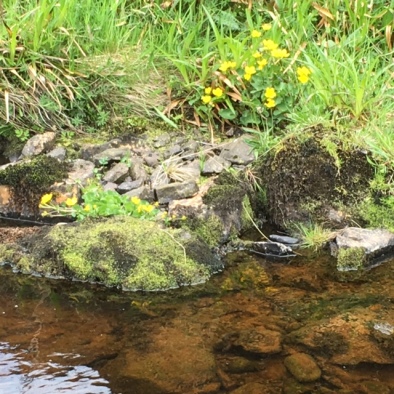 The second thread of my journey was to enter the magical world of the fairies. Nature spirits are integral to the stories and land of enchanted Scotland. It doesn’t take much imagination to see and feel the magic all around. The landscape lends itself to the dream state and entry to other worlds. The pristine beauty of the land with streams through yellow-flower meadows, ancient stone walls, ferns and dark hemlock forests is the backdrop for our fairy tales, our childhood stories come to life. So let me tell you some tales and visit the places of our dreams.

The first visit to the land of the fairies began my second day in Scotland. I arrived early to get over jet lag and visit some long lost friends in the Borderlands just south of Edinburgh. In this part of Scotland is the location for the wonderful tale of Thomas the Rhymer. Thomas was a 13th century laird who went with the Queen of Faeries to her world for 7 years. When he returned he had the gift of prophecy and it is said that he eventually left again with the Queen and was never heard from again. So off I went to find the stone that marked his encounter with the Queen. Up a narrow road near the town of Melrose, famous for its ruined Abbey, is a small marker with the story. Just a bit further on foot is the stone where Thomas first encountered the Queen of the Faeries and a nearby marker for the place where Thomas gave his prophesies. If only I could find this same magic and meet the Queen. I looked out over the lovely landscape and knew the fairy world was very close. I had tea just down the road by the last bit of Thomas’ house—the Rhymer Tower. Sir Walter Scott elaborated on this story in poem and Washington Irving used Thomas’ tale to inspire his story of Rip Van Winkle. 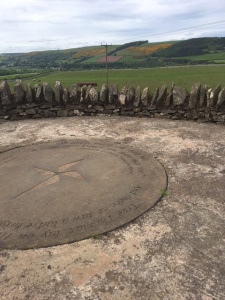 Marker for Thomas’ encounter with the Faerie Queen

My next encounter with the fairy worlds of Scotland was a few days later at Blair Castle just north of Edinburgh in Perthshire. This beautiful white castle was first started in 1269 and has over the centuries become an iconic part of Highland landscape and culture. In fact the day I was there the Atholl clan was having their annual highland games which meant lots of handsome men in kilts, a joy not lost on a bus full of women. Several centuries ago the nature spirits of the land came to the Atholl brothers and requested that they plant trees. So the brothers not only planted trees all over their extensive lands but planted a forest of exotic trees next to the castle. Oh My!!! This enchanted forest of giants was alive and powerful. When I entered their world I left my own and walked into another realm. The sound, feel, smell, sight of these beings was overwhelming. I wandered down the path amongst ancient trees so much taller than in the part of the world where I live. The cool breeze whispering in the trees perfectly conveyed the songs of happy birds mixed with the melody of the babbling brook. I really need some new words—magic and enchantment just aren’t good enough anymore. Definitely on the “return to soon” list. Oh and there is also a walled garden with ponds and bridges, nesting swans and cygnets—-ahhhh. 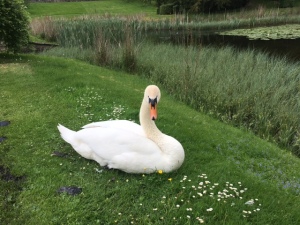 The fairy world reigns supreme on the Isle of Skye. I was still in total bliss from my time at Callanish when I took the ferry to the Isle of Skye and soon arrived at the Faerie Glen. The land contours form a miniature world of green mounds, tiny lake and low stone walls. If you can’t find your way to the nether world here you haven’t tried. I followed a mother sheep and her twins over the top of a small hill down to a saddle where I found an enchanted playground. Humans have built cairns and labyrinths into the landscape to form an interactive garden with nature spirits. Time stood still as I walked a labyrinth on the side of the hill and added a stone to a cairn. I chased lambs and just stood in awe of the subtle beauty of the green grass covering gentle hills rolling down to a pristine lake. I left fulfilled and joyful for my time in the land of the Faerie Glen. 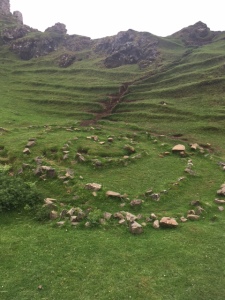 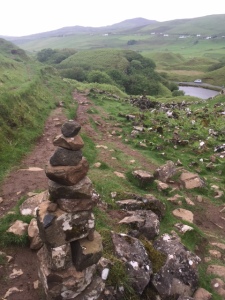 Just a bit farther down the road on Skye is Dunvegan Castle, the 13th century home of the McLeod clan. Around 1500, a Fairy Tower was added to look over the inlet of Loch Dunvegan and the small islands with seal colonies. On the day I was there the sun was shining and the islands were fully illuminated with the warm, bright light. I kept looking out the windows of the castle to the seal islands and thought how lucky I was to be there at that particular moment, to be part of this history and see what the lairds saw for centuries. On the wall in the castle is The Fairy Flag, a mysterious flag of silk that was said to originally to be a gift from the fairies to guard the infant children of the castle. The fairy flag is said to lose its powers if unfurled more than three times, so far it has been used twice to enlist the fairy world to save the castle. I wandered the informal gardens that were in full bloom. The enchanted land has a waterfall and paths leading down to the loch where you can get a boat to go see the seals close up. 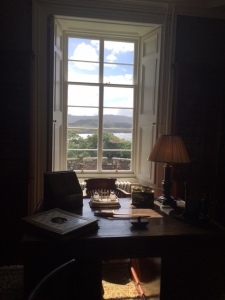 Looking out to the seal islands from Dunvegan Castle

After we left Dunvegan Castle we made one final fairy stop at the Fairy Bridge where often a phantom piper can be heard playing mournful tunes. I walked down the side of the bridge to the little stream the trickled through flower meadow and over small rocks. It didn’t take any imagination to see where fairies could hide along the soft bank. I didn’t cross the bridge because there is a chance you can enter the realm of the fairies and I was on my way to the Holy Isle of Iona and I had things to do—maybe next time.