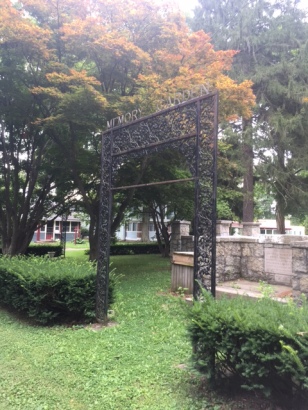 The last two years my passport has been tucked away as I have tended to family and refilled my travel fund. Fortunately rural America holds many hidden gems and I’ve traveled the highways and byways in search of the sacred. I’ve visited Vonore, Tennessee, Cullman and Tuscumbia Alabama, Peebles Ohio, Harrodsburg, Kentucky, Vergas, Minnesota, Carpenteria and Ojai, California, and now I have a new place to add to the list.

Last week I was headed to the Great Lakes Retreat in Olivet, Michigan, (a wonderful experience, I highly recommend) I stopped by Chesterfield, Indiana, to spend the night with a friend to break up the journey. About half way up the eastern side of Indiana amongst vast cornfields and tidy farm houses is the historic Camp Chesterfield, a spiritualist community. My teacher Rachael is a spiritualist minister but she comes from the English tradition and so I’ve never heard of the spiritualist camps in North America except Lily Dale, New York. Spiritualism is the communication with spirits and people who have passed away through a medium who is sensitive to the vibrations of the spirit world.

Camp Chesterfield was established in 1890 to provide contact with the spirit world and train mediums. There were many such camps across American during this heyday of mediumship but Camp Chesterfield is one of the last remain. Mediumship has become popular again as TV shows featuring mediums and the need for the comfort mediumship brings to people who are grieving lost loved ones.

In the morning after breakfast in the little cafeteria where each menu item was a dollar, my four dollar breakfast was perfect. My hostess had a reading to do for a friend so I happily headed out to explore on my own. Now if the Magic Kingdom in Disney World decided to make “Spiritualismland” it would have to be modeled after Camp Chesterfield. It is a playground of delights all with a patina of age and history. In the middle of the camp is an extensive park. First, there is a small cathedral and a chapel for services and messages. I poked my head into the little chapel and heard the organist practicing for a memorial service later that day. I moved on to the two hotels. The Sunflower built in 1914 is no longer used but I peaked in to see; it had the smell of a very old building and I would suspect it was very haunted, so I was glad that wasn’t my place for the night. The Western was build in 1945 and still houses the guest that come for classes. In the basement was a long room with two rows of twin beds each with a dressing table. In the back was a rack of dresses in case you forgot yours and needed something to wear for giving messages from the platform—-dress, pantyhose and closed toed shoes are required for the ladies, suit and tie for the men. The upstairs rooms were sparse but very clean. Across the way is a museum that was closed but has spirit art and apports (objects that manifest into physical form during seances)

I headed into the glen sparkling in the morning sunshine where I enjoyed the American Indian memorial and the totem pole located on Inspiration Hill. The Garden of Prayer is a grotto, perfect for mediation. I walked the labyrinth in my bare feet so I could feel the ground. After that I sat on what was left of The Toad Stools, two dozen small tables and chairs under the trees where mediums gave messages to the campers, an old fashioned psychic fair. The table tops were engraved with the names of the mediums. 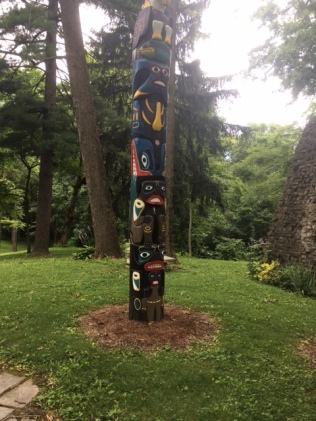 I wandered over to the Trail of Religions where there is a memorial to the world’s great religions with a bust of 10 leaders from Osiris to Mohammed. There was a memorial garden with the ashes of many of the mediums that had worked at the Camp. I gave my respects to Quan Yin and circled the outside of the camp where around three dozen summer cottages house the residents. The houses are close together and in every condition from needing lots of love to very pristine. Most have angel and St Francis statues decorating the tiny lawns. Many of the houses had signs in the front indicating that a reader lived there and the type of readings.

The camp was charming beyond belief and I enjoyed the atmosphere of church-summer-camp-meets-the-spirit-world. It is still an active camp in the summer with classes and a seminary. A unique place that has lasted a 125 years producing mediums of the highest training and integrity. There is a great need for good mediums. Over the years, as I’ve had hundreds of readings in my house, I have watched people come through the door broken and grieving and come out of a reading with renewed hope and healing. The loved ones in our lives are so precious and to reconnect without a doubt with the help of a great medium is a gift from Spirit.