Last weekend I was back in southern California to visit Alexandra for some much needed mother/daughter time. On this visit Alexandra chose a tour of Paramount Studios for our adventure. She now works in the film industry and has an encyclopedic knowledge of film history so it was fun to go see this historic studio. Our tour guide Angelica drove us around the sprawling studio in a little golf cart. We saw fake New York City streets, an empty fake lake with fake sky background, fake school for a kid’s TV show, and a very worn out set for a talk show. But thanks to the magic of the camera you would never know any of it is an illusion. Each large building had a plaque that listed the movie and TV shows that were filmed in the building.

The Truman Show (1998), one of my favorite movies, was filmed in one of the buildings as well as at Seaside, Florida. I consider this to be a very spiritual movie, the hero’s journey, the stepping out of illusion into full consciousness.

The story is about Truman Burbank (Jim Carrey) a baby adopted by a TV studio to be the star of a 24/7 reality show, except Truman doesn’t know he is on TV, he is just living his life. Around 30, Truman starts to notice a few things that don’t make sense. A spotlight labeled Sirius falls out of the sky, the rain machine is only in one spot, the radio starts announcing his location. His wife Meryl (Laura Linney) is constantly make strange statements that really are advertisements imbedded in the dialog. A girl he meets in school tries to give him a clue before she is fired from the set. His long dead father shows up as a homeless man.

Truman tries to go on a trip with Meryl but is stopped by a fire wall, a nuclear disaster and his own fears that have been carefully orchestrated by the creator of the show Christof (Ed Harris) who directs all the action from a fake moon in a giant enclosed set. We see people around the world watching Truman’s story unfold in their living rooms. Everyone wants to know “How will it end?”

Like Truman (True Man) we live in a world that keeps us unconscious. Religions tell us they have all the answers, just be a good follower. Media scares us and makes us fearful of immanent dangers and disasters. Science says that if you can’t see and measure it then it doesn’t exist. Adverting tells us what we desire and how hard we need to work for it. Christof is asked how he keeps Truman from knowing the truth. “We accept the reality of the world which we are presented. It is as simple as that.”

Every once in a while a crack appears in the fabric of our reality, a miracle, a moment of bliss, a Truth that can’t be ignored, an experience that can’t be explained. It is just enough to make us question, gives us a clue that there is so much more to our world. That there are infinite worlds to explore, new ideas, new ways of living, freedom.

Truman takes the tiny clues, overcomes his fears and makes a break for freedom. Christof tries to stop him by almost killing him. When Truman’s sailboat runs into the end of his fake world, he gets out and “walks on water” to the staircase into the painted clouds and opens the exit door to a new reality, a new consciousness, his new life. 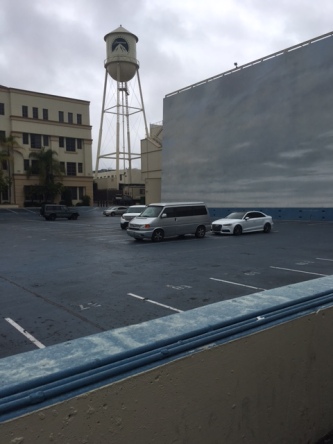 Studio where “Frasier” was filmed

3 thoughts on “The Truman Show”