I had one more stop to make on my library tour of southern California. After leaving the Joseph Campbell library I headed inland along a beautiful twisting road through the mountains and down to the town of Ojai. I had put Ojai on my wish list several months before because I wanted to go to the home and library of its most famous resident Krishnamurti. Over the months before my trip, I read about its charming shops and restaurants and watched some yoga videos that originated in a local studio.

It was lunch time so I had found a little Mexican restaurant with an outdoor patio that had wonderful food. I wished I had time to do a little shopping but I was on a mission. I headed out of town a couple of miles to the Krishnamurti Library and nearby Pepper Tree Retreat Center, only open three afternoons a week for a few hours. The library is in Krishnamurti’s white house surrounded by gardens and a very old pepper tree. The main room of the house is spacious with large windows and a fireplace at one end and two walls of bookshelves with his many books in several languages. There are pictures of Krishnamurti standing in the room 40 years ago and it still looks the same.

I had known about Krishnamurti for a long time. One of my teachers has taught Theosophy for many years and Krishnamurti is an integral part of the story. Theosophy is a philosophy founded by Helena Blavatsky and Henry Olcott in the 1870s that is still active today. It combines Eastern and Western thought about the nature of God and mysticism. The headquarters of the new movement moved to India where a young Jiddu Krishnamurti was discovered and expected to be the next “World Teacher” by Charles Leadbeater and Annie Besant. Krishnamurti and his brother Nitya were then educated and lectured all over the world to promote Theosophy and the Order of the Star in the East.

In 1929 Krishnamurti rejected his ties with Theosophy and his messianic status. He chose to take a different way which he call the pathless land. He and his brother had moved to Ojai for the climate and made his home there for the rest of his life. Despite his rejection of being a world teacher he continued to teach, travel extensively and write dozens of books. He also founded Brockwood Park School in England. He had great influence on the changing cultures of the 1960s and 1970s and on the great thinkers, musicians, world leaders and scientist during that time. You might not have heard of him before but his influence on modern society is great. He did fulfill his role as a world teacher but in his own way.

I spent some time in the light-filled room surrounded by Krishnamurti’s writings and then went into the small bookstore and visited with a lovely young women who was there for the next year as a student and intern. I actually have not read much of Krishnamurti’s work so I got a book and some DVD’s to watch.

I headed out to an organic herb garden on top of a nearby hill and had a seat to just relax and breath in the fresh air and sunshine. The garden was so peaceful and the surrounding mountains magnificent. What a beautiful day of gardens, libraries and deeply spiritual men, Joseph Campbell and Jiddu Krishnamurti. They both changed the way we see the world and interestingly enough met on a ship crossing the Atlantic when they young men. I felt I too got to meet them that blissful day in a garden in California. 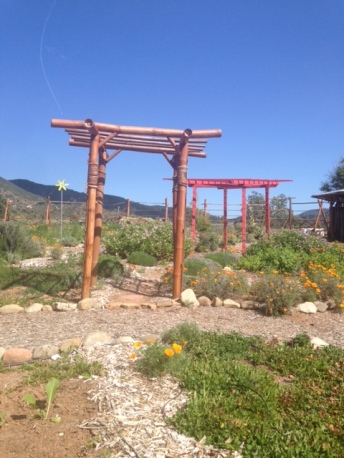 “We all want to be famous people, and the moment we want to be something we are no longer free.”

“I maintain that Truth is a pathless land, and you cannot approach it by any path whatsoever, by any religion, by any sect.”           J Krishnamurti