Not far from my home, about a 30 minute drive, is the birthplace of a remarkable man, Sequoyah. I often go there and take friends to this peaceful little museum and park tucked away in the coves of a man-made lake. The tiny museum, with an entrance fee of $3, has displays and a movie chronicling the history of the Cherokee people and Sequoyah.

If you’ve never heard of Sequoyah let me tell you about this genius that changed the lives of the Cherokee. Born in Tennessee around 1776, Sequoyah was a silversmith. Although he was illiterate he was fascinated by what he called “talking leaves” the white settlers used to communicate. So he set out to create a syllabary made of 86 symbols representing the syllables of the Cherokee language. It took him about 12 years from 1809-1821. The museum says that he received great inspiration from listening to bird sounds. He taught his young daughter to read and used her to prove his system worked. He asked the local councilmen to tell him something to write and then had his daughter to read back their words. Despite having endured ridicule for his endeavors, his system of writing was quickly embraced by the Cherokee nation and the majority of the Cherokee people were literate within months, surpassing the literacy of the local settlers.

No person had ever before singlehandedly developed a syllabary and Sequoyah was able to do this without being literate in any other language. His system was so well developed that is was fool proof and easy to learn and his syllabary is still being used. Newspapers and books were published with this new syllabary and it was essential for helping preserve the history, culture and spiritual practices of the Cherokee. Sequoyah went on to be a diplomat and statesman and was awarded a silver medal of honor by the Cherokee National Counsel which he wore the rest of his life.

Sequoyah is a modern day Thoth, the Egyptian god of writing and language. Sequoyah saw that written language empowered people and wanted his own nation to have this same autonomy. Unfortunately the Cherokee were brutally removed from the eastern US to Oklahoma during this time and Sequoyah worked to reunite the tribe and helped create a syllabary that would work for all the Native American languages.

Like Thoth’s caduceus in the library and Quan Yin holding the energy in the garden, Sequoyah’s presence has been in my home for over 30 years. A lithograph of his famous portrait hangs in the front hall along with other notable Native Americans. My father-in-law collected these portraits because they were produced by someone with our same last name and he also loved history. I prefer to think that my land and home welcomes the learning and wisdom exemplified by this great man and I’m honored that he has a special place in my home. 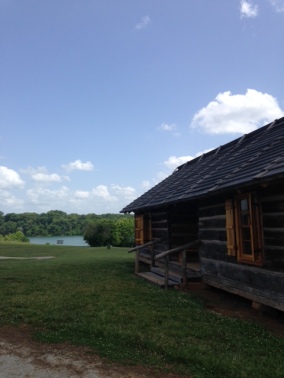 Replica of Sequoyah’s home in Tennessee