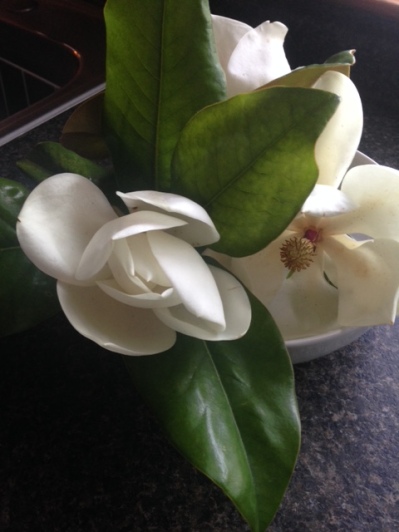 Magnolia blossoms from my yard.

It has been a year now since Alexandra and I finished our grand adventure/pilgrimage on the Camino in Spain. And what a year it has been. You know how certain years stand out in your mind, I have a few: 1994 when I moved to my first house, 1999, the year both girls learned the Bach Double Concerto back to back, 2006, the year Caroline was 16—need I say more, 2013, the year I moved to the farm. A lot of other years are just a blur with nothing note worthy.

My 50th year will go down as a year I won’t forget. Just days after my birthday I headed to Spain and walked 12 miles everyday for 5 weeks until I reached Santiago de Compestela. Each day was a joy and a gift to walk where millions of pilgrims walked with devotion along with great saints like Theresa of Avila and Francis of Assisi. We all walked along the Milky Way path for Compestela means way of the stars.

My prayer everyday on the path was to be strengthened, physically, mentally, emotionally and spiritually. I don’t think the people in my life would call me weak but there were life lessons I had not faced and was afraid of.  I wanted to come back a stronger person so I could start the next half of my life ready to take on new challenges and make it as wonderful as the first half. My daughters are grown now and I will forever miss those wonderful years of having them home but I want to keep growing and be productive.

There is a saying on the Camino, “the Camino starts when you get home”. I wasn’t home six weeks when I needed to call on the strength I had so prayed for. In fact I was faced with the very situations that frightened me most—-confrontation and death. First I had to confront a family member who was using the family for their own gain. Somehow I became the front line to protect the family. I’ve never confronted anyone in my life but there I was and the family started calling me Ninja Nancy (my first name). The betrayal went on for months and finally ended badly with the vengeful selling of the family farm in Minnesota. My efforts didn’t change the outcome but I walked away knowing I had fought hard, done my best and there was nothing more I could do. Now there are relationships that are forever lost but many others were strengthened and the bonds even tighter. I still don’t like confrontation but I now know I can do it when needed.

While I was in Spain my father was diagnosed with skin cancer with no available treatment options for his age. We thought he had a couple of years but by January he was getting sicker quickly and so my home turned into a hospice. My father’s mind was so sharp and his will to die consciously so strong that it was my deepest desire to keep him home with his family. With the help of hospice nurses and my brother, who stayed with me a month, I was able to keep him home until he died. Never in my life did I think I had the emotional or physical strength to face such a difficult task. The last few days were incredibly hard but I was able to pull from the strength that I had ask for. I faced what was a truly frightening task for me.

Loss and betrayal, two of the great themes of the human condition. I’ve had both in my life before but never like this past year. I’ve learned to be present with strong emotions in myself and in others. In the past I would run at the least bit of unhappiness. But it is ok that happiness isn’t in every experience, sometimes the courage to face the loss without losing oneself is all the spirit and soul wants.