The morning was perfect, flat path, not too cold and several little towns to stop and have coffee. For lunch we had pasta and veggies and saw our first piece of broccoli in a month. Since Leon there has been an improvement in the food selection and albergues. 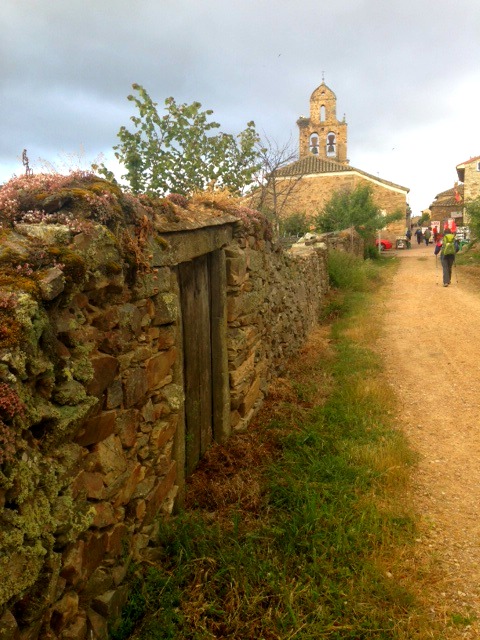 After lunch the path got steeper but it was so beautiful climbing to the highest point on the Camino. 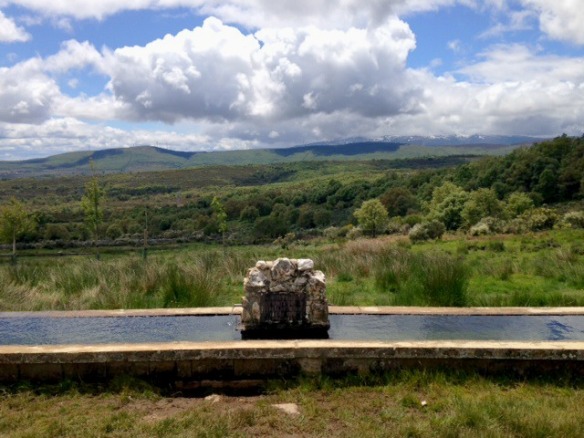 The narrow path was lined with shrubby bushes full of yellow or purple or white flowers. I stopped often to look at the mountains and the open land. I live where there are so many trees and so I love the wide open spaces and vistas.

We stopped for the night in the tiny hamlet of Foncebadon that was mostly collapsed ancient stone houses. The Albergue had a “hippie” vibe with lots of objects from India and very laid back. A sign said “no wi-fi, talk to each other”. Since we were on the late side we got beds in the overflow room.

We were taken through the barnyard, past the chickens and goats to a large room with mattresses on the floor. It was the yoga room and had all the usual pictures of the Buddha and Hindu gods. The bathroom was upstairs and included a stand-up toilet. Was I in Spain or an ashram in India, I wasn’t sure. But since I’d like to go to an ashram I was perfectly happy.

I spent the afternoon chasing chickens, petting dogs, milking goats (yes I got to milk a goat!!!) and talking to my pilgrim friends. Supper was this giant pan of paella and homemade yogurt with crystalized honey for dessert.

I settled in for the night on my mattress in the ashram and later someone came and built a fire in the wood stove so we were comfy and warm in the barnyard, on a mountain in rural Spain.