We left Casa Magica around 8 after a magical breakfast of fresh squeezed orange juice and boiled eggs. I have a knee that is a bit tender and we had a 15 mile walk ahead so I arranged to have my bag transported. We put some of Alexandra’s heavier items in my bag to lighten her load for the day. I had a bottle of water but other than that felt light as a feather. Funny that 15 miles without a pack is like a rest day. All perspectives change on the trail.

The morning light on the ancient church and all the land was breath taking.

After the busy town of Estella was one of the greatly anticipated treats for the pilgrims—- wine flowing freely from a tap and blessed by Saint James.

A short time later I took the trail through the woods not realizing it was an alternate route. Alexandra continued on the main route to town. My route went through a dappled forest and climbed higher for beautiful views. But I saw the town below and no other pilgrims and was a bit worried. I caught up with a couple of pilgrims since I could move faster without a pack and they confirmed my suspensions so I texted Alexandra and told her I’d meet her in Los Arcos and my temporary anxiety was gone and I was back to enjoying the scenery.

There was no food on my route but help came when two paths crossed and I met a friend with some chocolate to share. Another two miles down the road was a food truck in the field and I had a cheese sandwich, a beer and a rest.

The next few miles were open fields with alternating wheat and vineyards, like natures version of the Eucharist and I found it very holy. 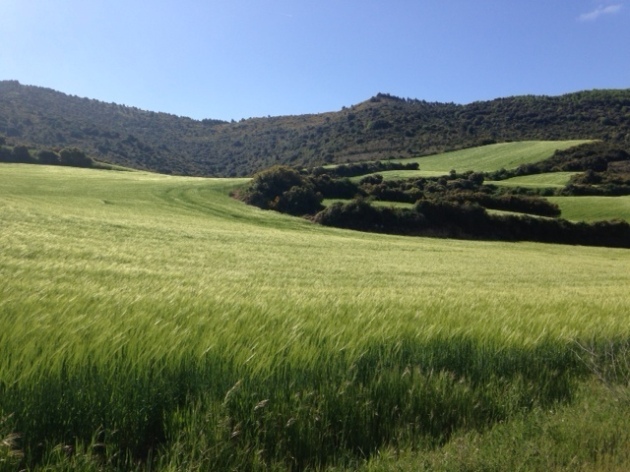 I bought my daily orange reward for a job well done and found the Albergue, my bag and a friend from 4 days ago. The rest of the afternoon was spent sitting in the shadow of the magnificent cathedral of Los Arcos, eating and drinking with friends, interrupted occasionally by cathedral bells.

The cathedral was pure gold with a beautiful cloister. I followed a new friend to the Mass and although I didn’t understand the words I knew the meaning.

“Blessed are you pilgrim, if your knapsack is empty of things and your heart does not know where to hang up so many feelings and emotions.”