It was hard to leave the enchanted garden at Cizur Menor but we were headed up the mountain by 8:30 with the help of coffee and tea. The flowers and scenery and weather made for a picture perfect morning and I could see the string of pilgrims before and after me making the long climb.

At the top of Alto de Perdon were these lovely metal pilgrims permanently bracing the wind and it was windy on the top.

The electric company has about 40 windmills along a ridge and the gentle whoosh of the blades were my wind chimes today. The inscription on the pilgrims says “where the way of the wind meets the way of the stars.”

The way down wasn’t as much fun–rocky and steep my feet were so tired. When I got to flat ground I found a bush and sat down and gave them a good rest. Meanwhile Alexandra had made friends and was a bit behind me. I waited by the Virgin Mary for her to catch up.

The next few miles made up for the steep descent. Field after field of emerald colored wheat were undulating iridescent waves. Whispering to me “Buen Camino” and pointing me in the right direction.

We took a short detour to a mysterious octagonal church from the 13th century. Perhaps Templar, perhaps Muslim influence. No one knows for sure. It was closed so Alexandra and a new friend and I laid in the grass and enjoyed the peace. The new friend had a ukulele which he strummed softly and it was a little moment of heaven. 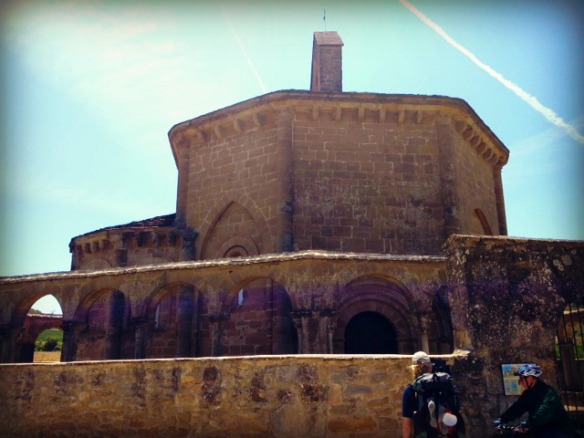 By then we were done and a knee was not happy so we stopped in the tiny town Obanos to spend the night with 30 of our closest friends all sharing two showers and two toilets. Some are already snoring—definitely need the earplugs.

“Blessed are you pilgrim, if you discover that the “camino” opens your eyes to what is not seen.”