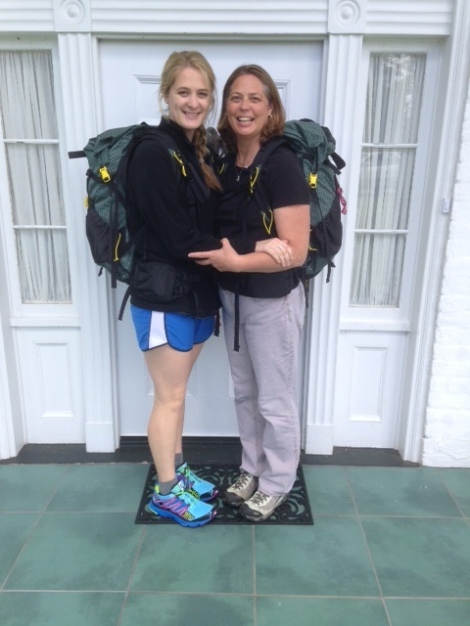 Alexandra and I left for the Knoxville airport at 2 on Thursday May 1.  We took a small suitcase to my friend Valarie which she will bring to us when we see her in Santiago on June 9.  It has what will soon be luxury items clothes, pajamas, swimsuit and make-up.
The flight to Philadelphia was late so by the time we took a bus to the gate the flight to Madrid was already boarding.  We ate our mini dinner, watched our mini tv and slept on our mini pillows. We arrived in Madrid about 8 am. It took us exactly 1 minute to get through passport control and customs. We went to find a taxi to take us to the train station but I spotted a bus with the name of the station on the side and we were taken directly to the station for 5€ each.

We had some time to wait so we found a cafe and had my first cafe con leche of the trip. The high speed train to Pamplona took about 3 hours and the scenery was exactly like the southwest US. I could have been in New Mexico or eastern Colorado. The scenery became greener by the time we made it to Pamplona (famous for the running of the bulls every July).

We were tying to figure out how to get to the bus to Roncesvalles and what to do during the 3 hour wait when I asked an Australian couple what their plan was. They were taking a taxi to Roncesvalles to make it easy on themselves so we asked to share a taxi. The hour drive was beautiful on windy roads that looked like the hills of East Tennessee.  By then it was raining and we were grateful that I had booked a room for the first night. It was a long two days full of trains planes and automobiles so I was happy that all my connections worked so well. We were on the move for about 20 hours.

We took a look around Roncesvalles –a tiny town right on the edge of the Pyrenees and dedicated to Charlemagne and the battle of Roncesvalles. The Song of Roland took place near here.

I went to the local museum while Alexandra napped and saw Charlemagne’s chestboard and other relics that were so important to the medieval pilgrims. Relics of saints were the rock stars of the era. Pilgrims came far and wide to see the bits and pieces of saints and no cathedral was without an important relic. My favorite thing in the museum was an enormous emerald pendant surrounded by emeralds. I now know where my birthday emerald is and I can come see it anytime I want.

We had the pilgrims meal in our little hotel. You eat family style with other pilgrims put at your table. We had a couple of Spaniards, one could speak a bit of English. We had a good time trying to communicate. After months of not eating wheat, that was about all there is, bread, pasta, fries. We had a lovely roast whole fish and then yogurt for dessert. Alexandra and whole fish don’t get along so she was given an egg and potato frittata.

We were exhausted by then so off to shower and bed, very grateful that all our travels went well and we had a room to ourselves the first night. 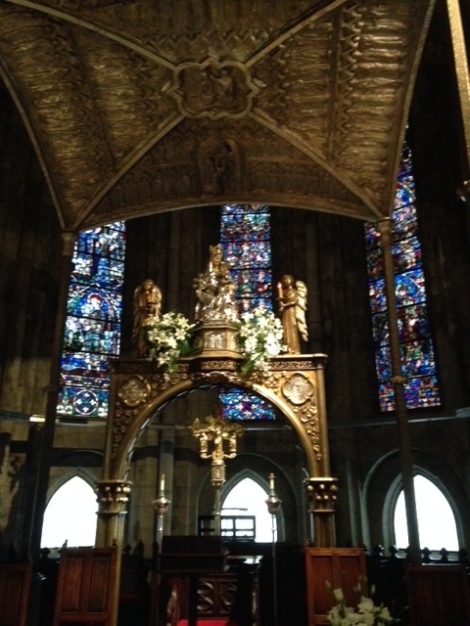 (Silver Virgin Mary and Baby Jesus. The canopy is a copy of the one in the cathedral in Girona Spain.)