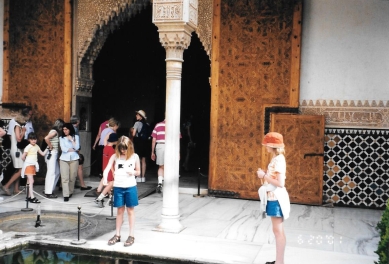 Caroline and Alexandra at The Alhambra, Granada, Spain 2001

So what’s with Spain? It has never been at the top of my travel list, that has always been, France, England, England, France, England. But for the second time I’m happily heading to Spain. All the other countries I’ve visited, I just pack a bag, get some cash and board a plane but not Spain. Both times I’ve been required to spend nearly a year preparing just so I can enter the country.

I went to Spain for the first time in June 2001. My daughters were 8 and 11 and were invited to go on a performance tour with a violin school out of Chicago. They had to qualify by December of 1999 by playing a particular Bach piece than they had to learn a large repertoire for the tour. Every note, fingering and bowing had to be perfectly memorized. It was a big task for a Second and Fifth grader but they did it. They didn’t always enjoy the daily practice but they love to perform and tours and violin camps are some of their favorite childhood memories.

We spent two weeks seeing the wonderful sights of Spain and performing for approving audiences. The girls made friends with the other performers and I was thrilled to be back in Europe for the first time in 13 years.

Now another 13 years have passed and I’m off to Spain on May 1 to walk The Camino. My younger daughter Alexandra is going with me. She is no longer the little violinist with pigtails but a grown woman almost finished with college. Instead of violin cases we will be caring backpacks. Starting in Roncesvalles in the Pyrenees, we will walk around 12 miles a day, staying in hostels, for the 500 miles to the Cathedral in Santiago. Pilgrims have been walking to the shrine of St James for 1000 years and now it is my turn.

For this trip instead of daily practice and memorizing music, there have been over 200 miles of training walks, physical therapy for a bad ankle, a Whole30 challenge to lose weight, an attempt to learn Spanish, yoga and lots of study. I don’t camp so I’ve needed to learn about backpacks, quick-dry hiking clothes and sleeping bags. I have to prepare 7 weeks of office work to keep things running smoothly on the farm. Hamilton is learning to cook more and do laundry. Caroline still has finals and an internship at the Physics Dept at UT. The cats will manage somehow.

My plan is to blog often on this trip. Thanks to a Smartphone I hope to send pictures and stories along The Way. I do keep in mind that the Camino has plans for me and I need to be open to the serendipity of each day. I have a hotel reservations for the first and last nights but for 38 days in between my life will be ……????

So the moral of the story is—-be careful what you name your blog. I thought it was about comfortable air-conditioned bus rides to beautiful archeological sites. I had no idea it meant I would have to actually walk. I’m ready to find out what else the Universe has planned. 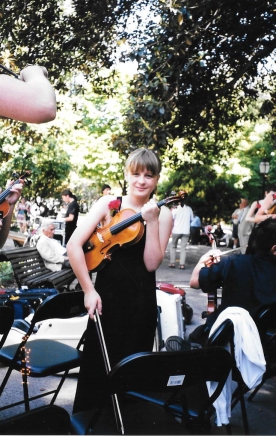