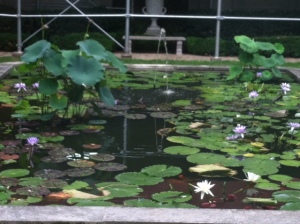 New York City was my final destination on my mother/daughters odyssey trip in August.  Alexandra is spending this semester studying and interning in Manhattan sponsored by her college.   So with our loaded van, I braved New York traffic.   As beautiful as I found Washington, DC, I found NYC overwhelming.   I had been there briefly a few times but always with my sister.  This time I was on my own to negotiate such an intense city.

We got through the Lincoln Tunnel and found a parking place for the weekend.  My sister offered me her adorable apartment in Chelsea on a charming street.   I managed to get our luggage to the fifth floor in the tiny elevator.  All is so different from my small town life where there is no traffic and ample parking.

Moving day was four days away so we had time for some sightseeing.  I don’t have a big agenda for NYC, I’m not a shopper and a lot of the restaurants and theaters are above my budget.    It is noisy, crowded, enormous and not particularly pretty.    So I went in search of things I love and I found one of my greatest loves in The Big Apple;   Egypt.

The first place I found Egypt was in the Frick Collection, in a spectacular home on 5th Ave which houses a world class art collection.  Just recently, I learned about Henry Frick from watching “The Men Who Built America”.  Frick made his fortune in the steel industry at the great expense of the workers.   Much hated in Pittsburg, he went to New York to spend his money on art and redeem his reputation.   I enjoyed the beautiful rooms and masterpieces but my time with Egypt came at the end when I was leaving.  Hidden in a closed off courtyard were the Blue Lotus which I’ve written about before.   They were essential to the Egyptian religion but have been lost to Egypt for 2000 years.   I gasped when I saw my beautiful flower friends peacefully floating in the pond.

The next day Alexandra and I headed to our most anticipated place in NYC, The Metropolitan Museum of Art.    She wanted to see her all time favorite painting by Ingres and I wanted to see the Temple.   In a large glass room is a small Egyptian temple rescued from being flooded by the Aswan Dam.   On the far wall are four Sekhmet statues from the Temple of Mut.   I could sit there all day by this small but powerful piece of Ancient Egypt.   There is also a room of statues of Queen Hatshepsut from Deir el-Bahari, whose successors tried to wipe her from history but where she has an honored place.     I won’t make it to Egypt this year but I got my Egypt fix.

Uninitiated in the mysteries of street parking in New York, I parked in an unmarked no parking zone.  But before going to post bond on my car at the police impound lot, I went to see Cleopatra’s Needle, an obelisk from Heliopolis.  Cleopatra’s Needle is one of three related obelisks found outside of Egypt.  One of the other two is in London near Victoria Embankment Gardens and another at Paris’ Place de la Concorde and now I have seen all three.   Much older than Queen Cleopatra, the obelisk is tucked away behind The Met in Central Park.   The inscriptions have been mostly worn away after 5000 years but there is an interpretation on the railings surrounding it.    I wanted to jump the railings and touch it but with my car already on the wrong side of the law, I decided I had better behave.  So instead I just happily sat in the shadow of this magnificent piece of Egypt.

So like me, if you get tired of the intensities of modern life and cities,  just find a piece of Ancient Egypt and sit and soak up the wisdom of this special land.   And please say a prayer for modern Egypt that it will find peace once again and that the wonders of Ancient Egypt will be secure and the people will be happy and free. 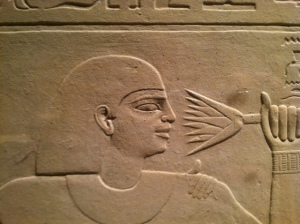 Smelling the Blue Lotus      Sekhmet Statues from the Temple of Mut 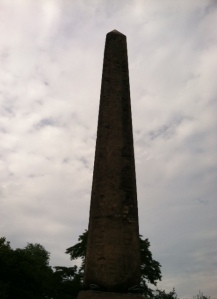