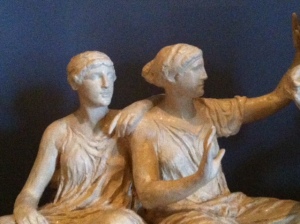 We think we are a modern society but really we are still greatly influenced by the Ancient Greeks, in our architecture, literature, theater, politics, education, philosophy and psychology.   Although the Greeks got their knowledge from the Egyptians, our modern culture more commonly credits the Greeks.

The gods and goddesses of Greek mythology are the reflection of the human psyche both ancient and modern.   Our culture may have changed but the drama of the human mind and heart is still the same.  Love, jealousy, war, peace, hate, envy, gluttony, joy, sorrow are still played out everyday by everyone on the planet.  Myths are stories that express these emotions and experiences.

I too have played my roles in these timeless Greek tragedies.  My heart is my stage and my relationships my drama.   I was told many years ago that the archetype of Demeter was very prominent in my life.  Demeter is the goddess of the harvest and the mother archetype.  Being a mother was all I ever wanted and it came very naturally to me.   I enjoyed my role as Demeter and happily stayed at home to take care of my girls.

What I didn’t realize was that the myth is not just about Demeter but Persephone and Demeter.   In the myth mother and daughter are bound together.   When Persephone was abducted into the underworld by Hades, Demeter searched for her ceaselessly and made a bargain with Hades to get Persephone back.

When my eldest daughter Caroline was a teenager Hades also abducted her to the Underworld of depression.   I went searching for her and found her and through years of difficulty and love I was able to help her find her way out.   When we were deep in this underworld journey I realized that as a Demeter I had to have a Persephone or the drama would not be played out.   I never told her about this drama but it helped me to see our challenge through a larger story.

It wasn’t until my daughter’s second year of college that the difficult times seemed to lift for good.   That summer she found a beautiful buff colored kitten near a local coffee shop.   She brought it home and since we name our female cats after goddesses, she decided to call her Persephone.   Unconsciously she had transferred that archetype to this kitten so she could now take on a different role.  The cat Persephone is oblivious to the part she plays.

Now my daughter is Athena the warrior goddess of wisdom, taking on the male dominated world of math and science and thriving.   I will continue to enjoy my role as Demeter, knowing I have done my part but now I too enjoy other roles like Athena the warrior, Artemis the sister, and my husband’s favorite, Hera the wife.

The Goddesses in Every Woman and

The Gods in Every Man by Jean Shinoda Bolen

1 thought on “Demeter and Persephone”